Huaxia Culture and Tourism Group won the world’s attention once again on behalf of China!

On November 19, 2019, local time in the United States , the Themed Entertainment Association ( hereinafter referred to as “TEA”) announced the 26th winner list of “The Oscar in the World of the Global Theme Park” ——TEA Thea Award in Burbank, California, USA, and it would be officially awarded at the 26th annual TEA Thea Award Ceremony in Anaheim on April 18, 2020 , which shocked the same industry and attracted the attention of people all over the world.

Weihai Huaxia City Scenic Spot ,which belongs to Huaxia Culture and Tourism Group, had won the Outstanding Achievement Award of TEA which represented the outstanding achievement and the highest standard of art and science in the world of the Global Theme Entertainment Industry. In addition, Weihai Huaxia City Scenic Spot had become the only performance enterprise in China which could receive awards at the same stage with Universal Studios and Disney Company in the world!

The following documents are published about the awards: 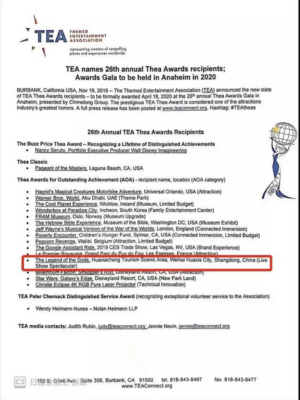 On the base of last year’s trophy, it said: “The Outstanding Achievement Award of “TEA Award ” is the running live performance The Legend of Camel Bells, which was awarded to Huaxia Culture and Tourism Xi’an Resort in Shanxi by ” TEA “Themed Entertainment Association. And it represented the outstanding achievement and the highest standard of art and science in themed entertainment industry.” I don’t know what kind of praise will be written under the trophy at next year’s award ceremony?

The Themed Entertainment Association (TEA) is a non-profit international alliance, founded in 1991 and headquartered in California, USA. It has become the most authoritative organization in the global theme entertainment industry. At present, it has more than 7000 industry experts from all over the world.

The association had selected and awarded the TEA Award since 1994, which aimed to recognize the theme entertainment design projects, amusement facilities, exhibitions and scenic spots which created excellent and extraordinary experiences for tourists in the global industry. The award was recognized as the highest honor in the theme entertainment industry. Because of its important position in the industry and the grand award ceremony, it was honored as the “Oscar” in the global theme park industry. The previous winners of the “Outstanding Achievement Award” of TEA were the industry leaders who stood out from hundreds of tourism enterprises in the world.

How did The Legend of Mortals make foreign judges fall in love with Chinese culture and give the grand prize to Huaxia Culture and Tourism Group resolutely for the second time?

5A Level Scenic Spot on the “Mine Pits”

“This wonderful performance can not exist without Xia Chunting, the chairman of the board of Huaxia Group, who have invested and contributed a lot of energy to reform thousands of acres of quarries for 16 years.” The TEA Thea Awards Committee wrote in the official comments : “we are awed and surprised by such great actions and boldness, appreciate and praise the chairman Xia’s commitment to the environment especially!”

The “Legend” Series of Huaxia Performance have the first movable auditorium which can accommodate 3000 people to watch the performance at the same time. The use scale of stage equipment is eight times larger than that of a single show in Las Vegas. Also, they have 47 invention patents and utility model patents of stage with independent intellectual property rights .Besides, the super clear LED screens with the size of 15 basketball courts are divided into real scenes to form the combination of video and real scenes, which makes the audience feel like a dream.

The “Legend” Series of Huaxia Performance send the audience to the best viewing position of each scene, which break the traditional viewing mode of audiences facing a stage for thousands of years. Its innovation lies in that the audiences are surrounded by the stage, which is a new three-dimensional viewing experience and a subversive revolution in the history of world performance.

The stage of The Legend of Mortals is located in the natural landscape in the Weihai Huaxia City Scenic Area, which breaks the single stage performance mode in the world. The audiences can enjoy the wonderful performance across time and space of water, land and air by taking the rotating mobile stand.

The “Legend” Series of Huaxia Performance is rooted in the local area, inheriting the historical tradition and activating the cultural source. Because of its unique way of development, Huaxia Culture and Tourism Group has achieved great success now.

The Legend of Mortals of Huaxia Culture and Tourism Group in Weihai Huaxia City Scenic Spot won “The Outstanding Achievement Award” of TEA Award again this time, which meant that the leading position of Huaxia Culture and Tourism Group in the cultural and tourism industry has been recognized by the international authorities again, and had truly achieved the goal of walking to the world and telling the Chinese story to the world.

Looking forward to the future, Huaxia Culture and Tourism Group will continue to follow the strategy of Cultural Power, tell the Chinese story, and create culture and tourist attractions which tourists and people like. Live up to the high expectations of tourists and the industry, and make persistent efforts to create brilliant future!